The Legend of Sidney Wallace

Sidney Wallace was a legendary figure from Clarksville, Arkansas, during the state's Reconstruction period. Depending on which side you listen to, he was either a hero, avenging the murder of his father, or a coldblooded killer and a symbol of the lawlessness of the period.
In December of 1863, Wallace's father, Vincent, who was a Methodist minister, was killed by three or more men in front of the Wallace home near Clarksville. The men were wearing Union army coats, but reports differ as to whether they were actual Union soldiers or bushwhackers disguised as soldiers. Accounts also differ as to whether 12-year-old Sidney witnessed the murder. Some say he did, while others say he was shielded from the sight by the family servant, Missouri Blackard. Blackard supposedly recognized all the killers but did not reveal their identities until Sid Wallace reached his 21st birthday.
According to legend, Young Wallace then set out to avenge his father's murder, first traveling to Kansas to kill a man who had participated in the 1863 attack. In 1871, he shot (or shot at) Joseph Dickey on a road outside Clarksville and beat up Dickey's companion, Dud Turner. Turner filed charges of attempted murder against Wallace. Released on bond, Sid and his brother George went looking for Turner, and Turner killed George in the showdown. About the same time Sid Wallace also reportedly killed constable R.W. "Doc" Ward and a man named Davis.
Turner was arrested for George Wallace's killing, but Judge Elisha Mears discharged him, saying the shooting was a clear case of self defense. This infuriated Sid Wallace, who killed the judge and took to the woods to hide out. He was tracked down, however, and lodged in jail at Clarksville. He broke jail but was caught and returned to his cell. Then, in November of 1873, Sid killed Thomas Paine from his cell during another jailbreak attempt. According to Wallace's defenders, all or nearly all of these killings were somehow related to Sid's quest for revenge for his father's murder, and they held him up almost as a hero. In fact, the New York Times claimed that Arkansas, prior to Sid's latest crime, was a place where "murderers, instead of exciting horror, were set up by the young women as heroes, to be crowned with laurel wreaths and decked with roses."
The Times reporter applauded the fact that Arkansas seemed determined to finally bring Wallace to justice and said that such determination to bring murderers to justice might "eventually result in making the state a desirable place of residence."
Wallace was convicted of murder in the killing of Judge Mears and sentenced to hang. He was held for safekeeping at the state pen in Little Rock from February 18 to March 9, 1874, when he was brought back to Clarksville to face the gallows. He was hanged four days later in front of hundreds of spectators. A contemporaneous newspaper account reported, "The notorious desperado Sidney Wallace, defied the crowd and said clearly, 'I have no confession to make to man, but whatever I have to confess must be to God. I die in defense of myself and friends, and I regret not having a dozen deaths to die.'"
Legends arose years later that Sid Wallace had survived the execution attempt and that the casket buried by the family was actually filled with nothing but sand bags. The New York Times, on the other hand, in reporting the execution, claimed that Mrs. Wallace "rather gloried in" her son's crimes "than condemned them." The Times, citing the Little Rock Republican newspaper, said Mrs. Wallace had urged Sid's brothers to follow in his footsteps. She supposedly wanted them to "go the same road he had gone and when they were dead, she would come in." Such sensational reporting is about as believable as the legendary claims that Sid Wallace survived his execution.
at March 11, 2014

I am a descendant of Charles and Hannah Waller. Do you by chance know who his parents are?

Charles and Hannah Waller are listed on the 1860 Bartholomew County, Indiana, census, but that is as far back as I've tried to trace the family. The census says Charles was born in Kentucky but don't know who his father was.

Criticism of "Order No. 11" and the Artist's Response 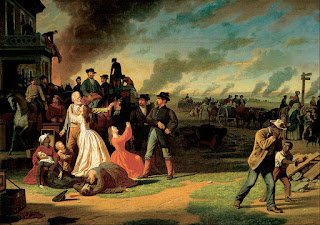 Larry Wood
I'm a freelance writer specializing in the history of the Ozarks and surrounding region. I've written eighteen nonfiction books, two historical novels, and numerous articles. My latest books are Bigamy and Bloodshed: The Scandal of Emma Molloy and the Murder of Sarah Graham, Midnight Assassinations and Other Evildoings: A Criminal History of Jasper County, Mo.; and Lynchings, Murders, and Other Nefarious Deeds: A Criminal History of Greene County, Mo. As an Amazon Associate, I earn commissions from qualifying purchases made through links on this blog.